What Is a Middle Ear Infection?

Ear infections: if you’re a parent you know about this common condition that affects children, often at a very young age. The late night tears, the ear tugging, the repeated trips to the pediatrician, the pink liquid antibiotic. It’s a familiar scene. As consistently predictable as this routine seems, acute otitis media (AOM) – the medical term for the most common type of ear infection – can be more complicated.

Acute otitis media is also the most common diagnosis in a pediatrician’s office, and a top reason why antibiotics are prescribed. Roughly half of all infants will have at least one ear infection by their first birthday. By age three, up to 90 percent of children have had an ear infection. Acute otitis media is infrequent in school-age children, adolescents, and adults, but can still occur.

According to research published in 2014, ear infections cost the U.S. health care system upwards of $3 billion per year. Health economists add that the total cost increases to $6 billion when the lost wages of parents are added to the total.

What Is Acute Otitis Media? 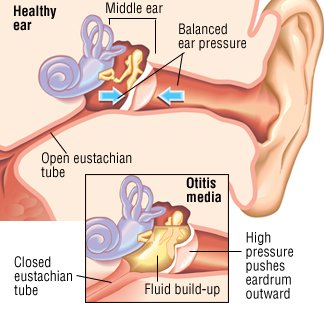 Ear infections can be common in children who also have a viral cold. Symptoms of an ear infection may begin during the 3rd to 7th day of a cold. Children with an ear infection usually also have a runny nose and nasal congestion. Mild hearing loss may occur, but it is usually temporary. However, if hearing loss lasts an extended period of time, it may cause problems with speech, language and learning.

How Can You Recognize an Ear Infection?

If you think your child has an ear infection, see your healthcare provider. They can make an accurate diagnosis, look for complications, and prescribe the appropriate medications, if needed.

A cardinal sign of an ear infection is a bulging tympanic membrane (ear drum), as visualized by your doctor with an otoscope, and ear pain. Older children may also experience hearing loss.

In younger children and infants, the symptoms of acute otitis media may include:

What Are the Risk Factors For Acute Otitis Media?

Anything that causes the eustachian tubes to become swollen or blocked can lead to ear infections. These might include:

Other factors that may increase your child’s chances of developing an ear infection include:

Ear infections are not contagious. However, colds are contagious and may spread through a daycare center or school and increase the risk of getting an ear infection.

Drainage of green or yellow fluid out of the ear may indicate that there is a ruptured eardrum.

How Is Acute Otitis Media Diagnosed?

First, your doctor will ask about how long symptoms have been present, presence of ear pain, any discharge from the ear, and if there has been a fever. Your doctor may also inquire about a previous history of ear infections.

Your healthcare provider can look into your child’s ear to see if there is an infection. An instrument called an otoscope, a cone-shaped tool with a light, is used to view the eardrum. They may look for areas of dullness or redness, fluid behind the eardrum, blood or pus inside the middle ear, or a perforated eardrum (a hole in the eardrum). The doctor may use a puff of air to see if the eardrum moves or do a test called a tympanogram that measures how the eardrum moves.

Sometimes wax (cerumen) may block the ear and this will need to be removed. A hearing test may be recommended.

What Medication Treatments Are Available for Otitis Media?

Some children will get better without specific antibiotic treatment; however, most children under 24 months of age, with a fever over 102.2 degrees F, or with infection in both ears will benefit from use of an antibiotic. For older children with severe symptoms, your doctor may adopt a “wait-and see” approach over 48 to 72 hours, as some ear infections will improve on their own. Parents must be willing to follow-up with the doctor in 2 to 3 days with the “wait-and-see” approach.

Antibiotic choice should be based on effectiveness, patient-specific needs like allergies, taste or dosage form preference, dosing convenience and cost. It’s important to remember that although most antibiotics used for ear infections are very safe, there are still side effects. Between 4 and 10 out of every 100 children experience side effects, such as diarrhea or rash, from antibiotic use.

As recommended by the 2013 American Academy of Pediatrics (AAP) guideline, high dose amoxicillin (80 to 90 milligrams(mg)/kilograms(kg)/day in 2 divided doses) for 5 to 10 days is the treatment of choice in most cases. This recommendation did not change from the 2004 guideline.

If mild penicillin allergy without anaphylaxis, bronchospasm, or angioedema:

If severe penicillin allergy including cephalosporins:

Patients who fail a third antibiotic treatment should be referred for tympanocentesis and a possible infectious disease consult if organisms are multidrug resistant; however, this is not a common outcome.

In 2015, some clinicians believe that amoxicillin/clavulanate or a second- or third-generation cephalosporin with beta-lactamase activity should be the preferred treatment of AOM, due to growing bacterial resistance to amoxicillin.

What If My Child Has Frequent Middle Ear Infections?

Recurrent ear infections can be a problematic for both parent and child. A child is considered “otitis prone” when they have 3 ear infections within a 6 month period or 4 within a year.

Risk factors that may increase the frequency of ear infections include:

The insertion of tympanostomy tubes (ear tubes) may be recommended in these cases. While there are inherent risks with any surgical procedure, they are infrequent with ear tube insertion. The benefits of ear tubes include fewer episodes of AOM and the ability to treat future infections with topical antibiotic therapy (ear drops) instead of oral drugs.

In July 2015, the FDA announced they were targeting 16 unapproved ear drop ingredients often used in infants and young children. These drugs, prescribed and sold for years to relieve ear pain and swelling, have not been evaluated for safety, quality and effectiveness. The agency notified the manufacturer to stop marketing the drops following reports of local allergic reactions of the ear, eye, face, neck and mouth. The drops can also cause itching, stinging, burning and irritation of the ear. The following products that are covered by this action include: benzocaine; benzocaine and antipyrine; benzocaine, antipyrine, and zinc acetate; benzocaine, chloroxylenol, and hydrocortisone; chloroxylenol and pramoxine; and chloroxylenol, pramoxine, and hydrocortisone.

Plane Travel: What To Do?

Can I Prevent An Ear Infection?

Vaccines are available to help minimize ear infections in children, and are part of the normal routine vaccine schedule for pediatrics. Children should be immunized against two common bacteria (Haemophilus influenzae and Streptococcus pneumoniae) that cause middle ear infections.

Clinicians recommend the conjugate pneumococcal conjugate vaccine to all children according to guidelines. Children usually receive 4 doses: one at 2, 4, 6 and 12 to 15 months.

Since 2002 the Centers for Disease Control and Prevention (CDC) and the American Academy of Pediatrics (AAP) have recommended the conjugate pneumococcal vaccine for infants and toddlers under the age of five.

Are There Alternative Treatments for Otitis Media?

Complementary and alternative medical treatments are not recommended for ear infections in children, as there may be an infection that requires use of an antibiotic. Olive oil and herbal extracts have not been proven to have any effect.

Similar conditions of the middle ear that may be related to an ear infection or result in similar middle ear problems include the following:

Visit us on social networks:

Visit us on social networks:

Call us wherever you are planning to travel, please visit the SafeCare Travel Centre.